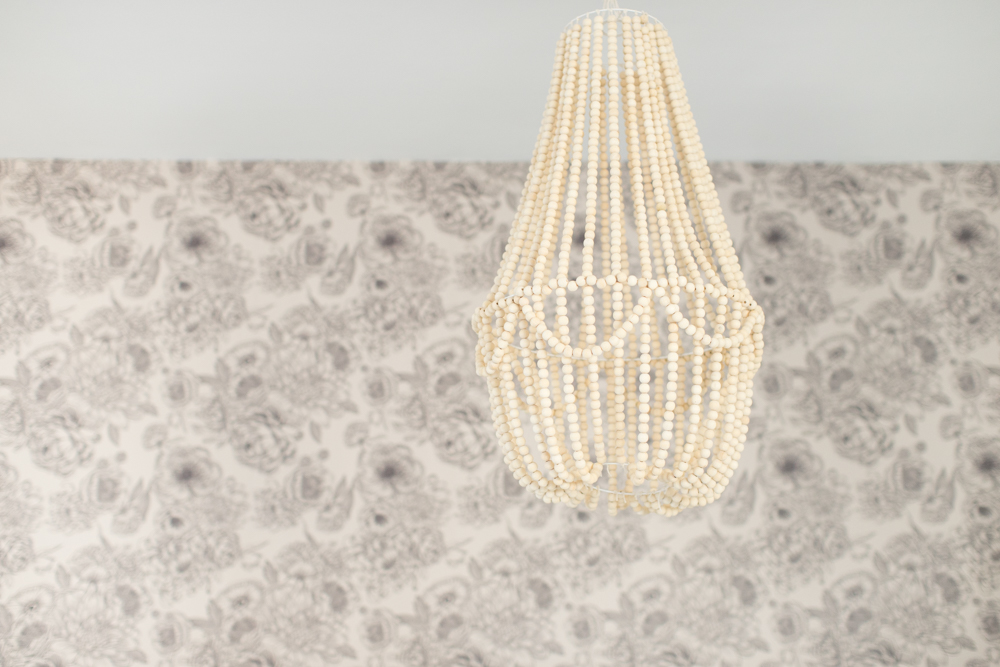 In between races against the clock, I sometimes take a break and do things that help me clear my mind like long, easy DIYs. I spent last weekend threading beads, literally! I’m also reorganizing at home (like now is a good time...). Plus, I’ve been looking around decoration stores and I can tell you that I’m very unsatisfied with their lights. Unsatisfied is a strong word, I’d say I’m frustrated because I have expensive taste. I’m sure you know what I’m saying, as soon as I enter a store, I’m always drawn to the most expensive thing, it’s a fact. But the truth is that this month has taken it’s toll on my bank account... 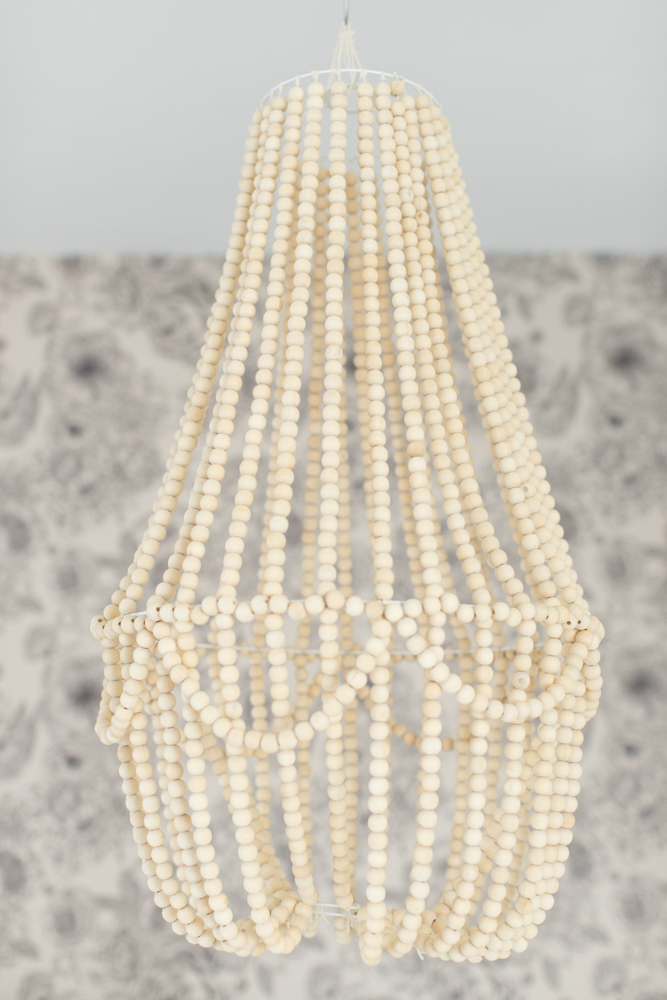 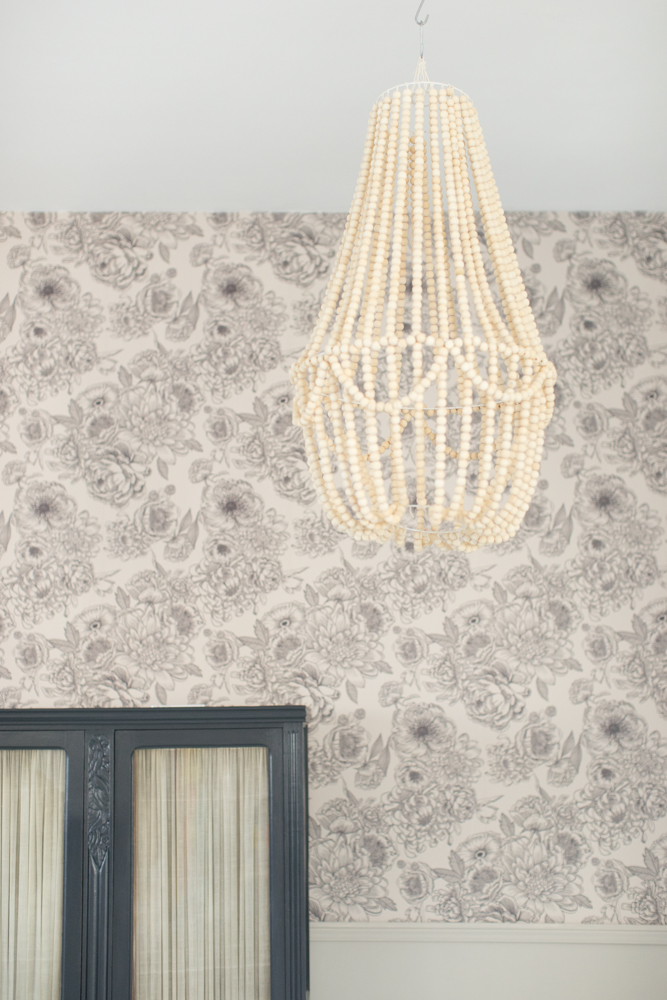 So DIYs and patience are my best friends! Patience for making tedious things but not for waiting for the exciting things in life! I went to a decoration boutique and I fell in love with a chandelier made out of turquoise terra cotta beads, super expensive even though it was a chain store that usually has affordable prices... It’s always the same. I thought to myself, I could make my own out of wooden beads! One season of Homeland and 2000 wooden beads later, I present to you my DIY chandelier for less than 50 euros! 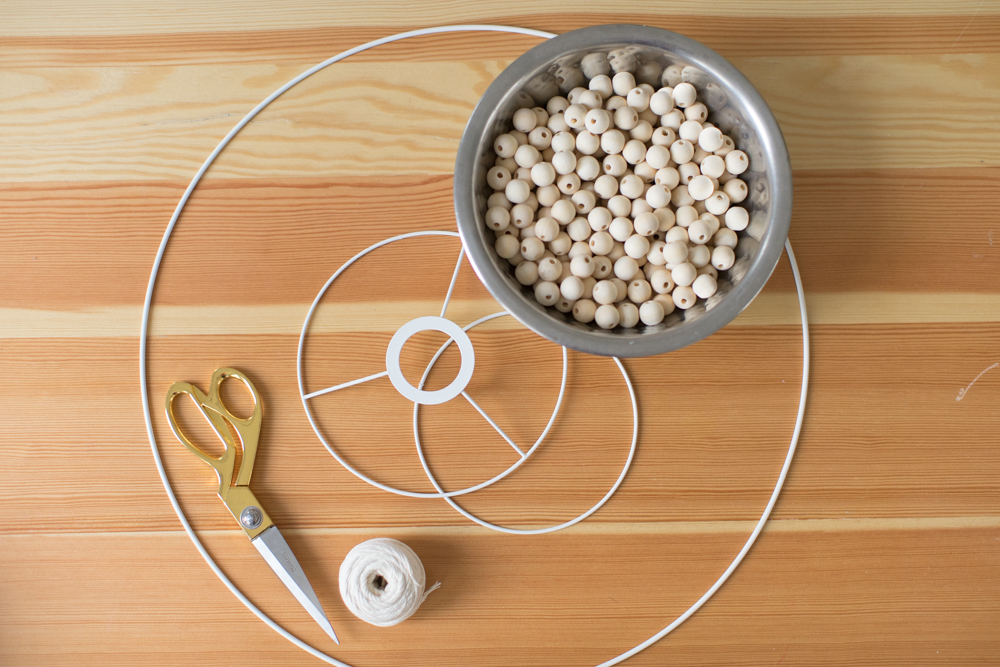 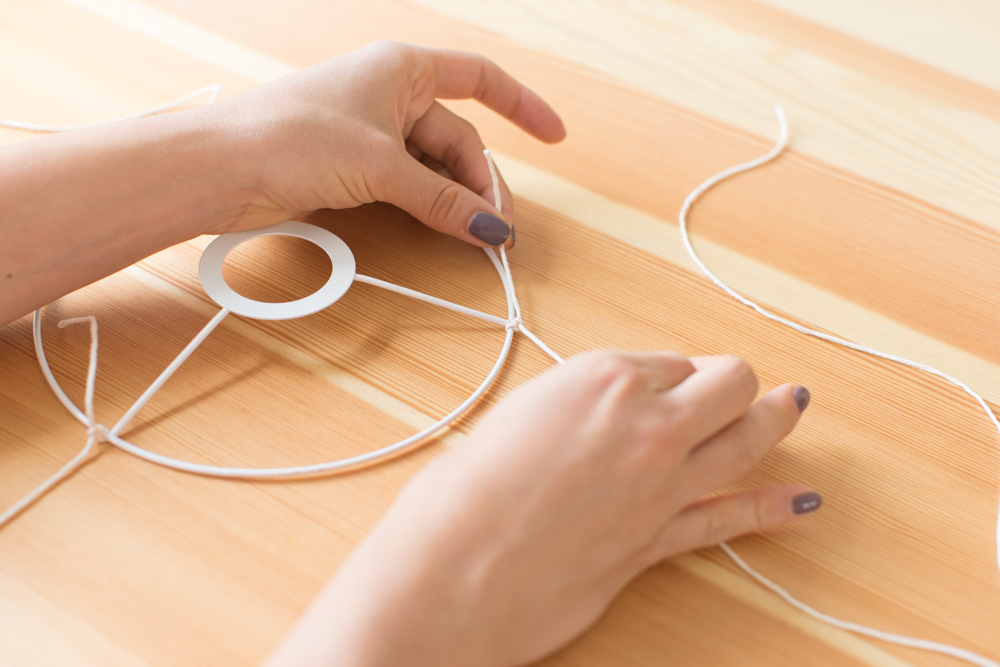 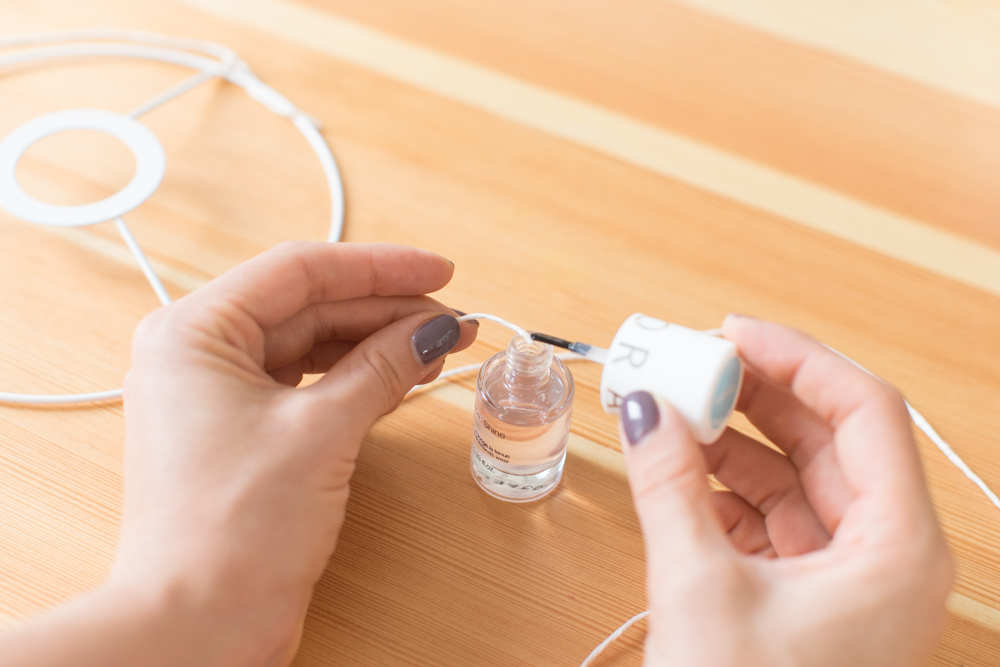 Take the rim measuring 18cm in diameter, this will hold the lightbulb. Attach the thread next to the three arms, making triple knots. Cut each thread so that they measure 1m50 long. Dip the end of the thread in clear nail polish to make it stiff. This will make it a lot easier to thread the beads. 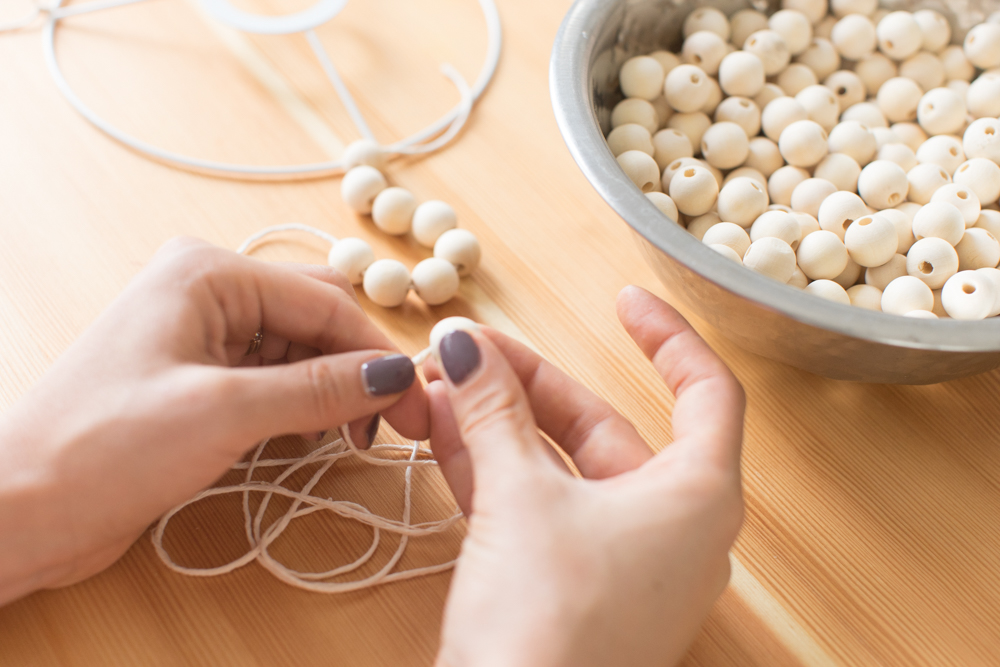 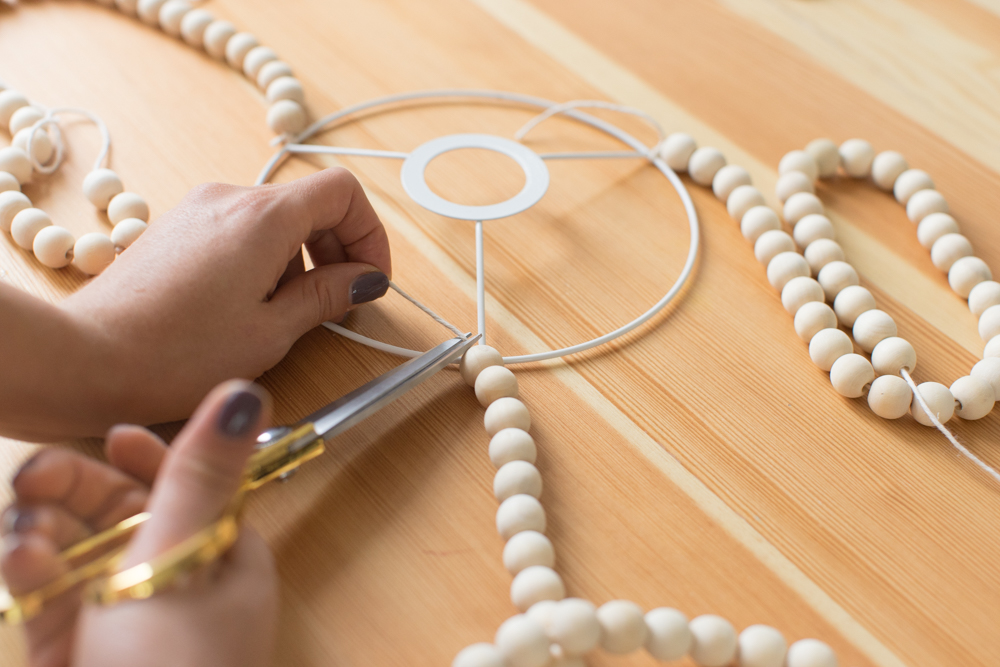 Start threading the beads onto the first three threads, 35 beads each. Glue the knots at the end and cut off the extra thread. 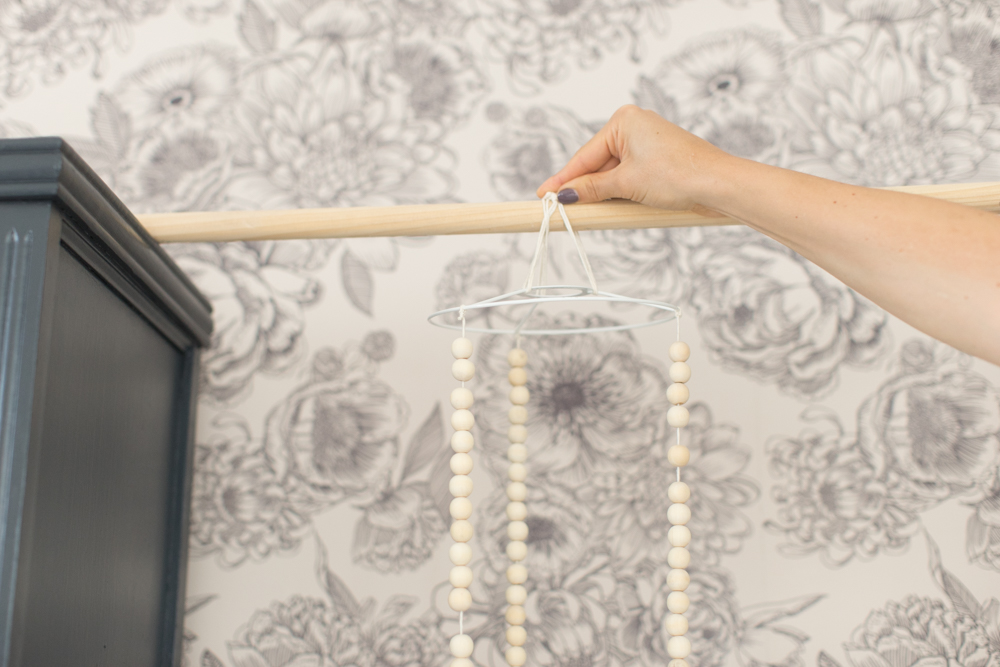 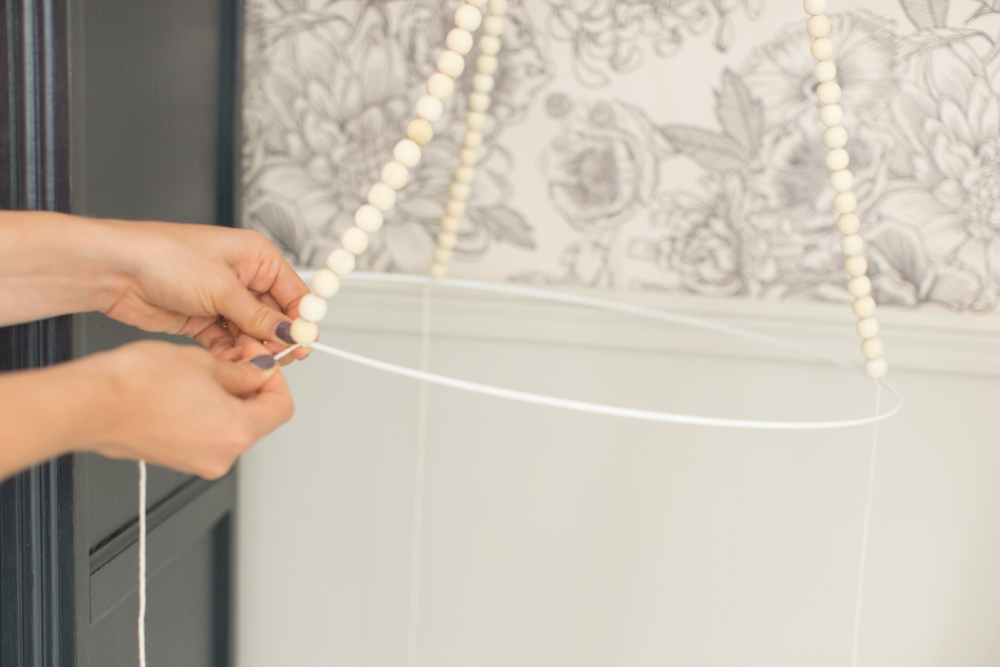 Between two cabinets, or two bar stools, set a rod, a broomstick, etc... hang your chandelier and three threads of beads. Now attach the largest rim using the three threads of beads with a simple knot, each equally spaced out. Tighten each of your knots so that there isn’t any extra space on the thread between the first beads and the light bulb rim. 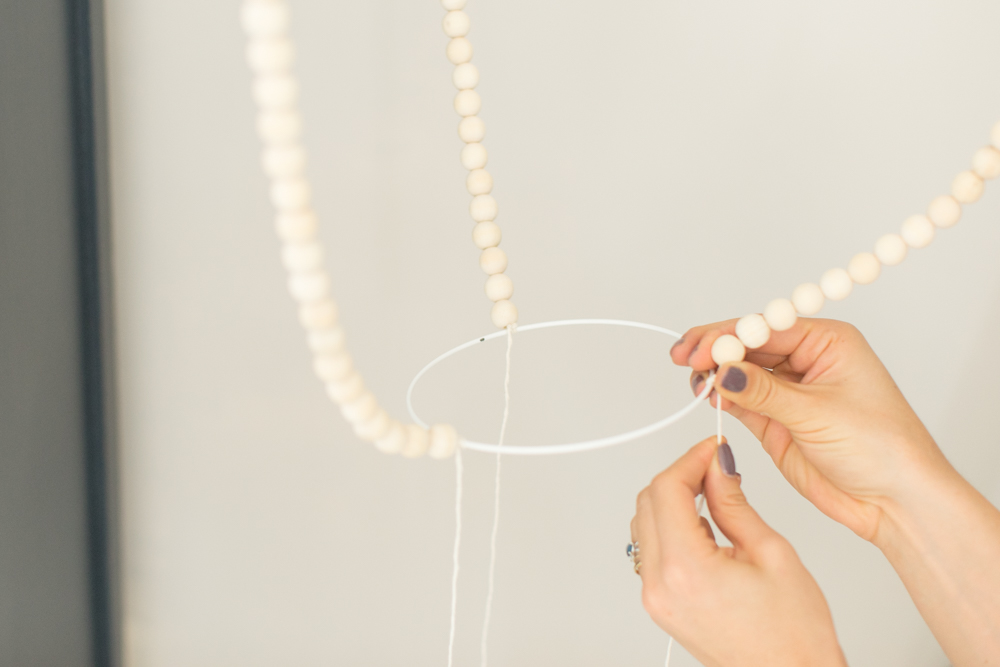 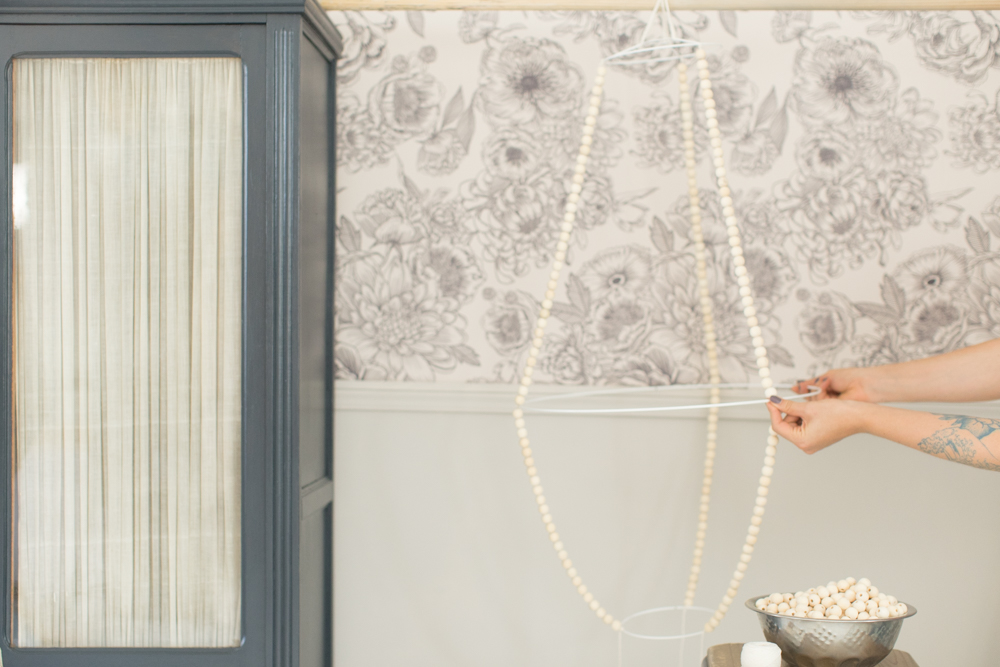 Keep in mind that it’s important to keep things even and equal, and always use the same size beads and keep the same number of beads on each thread. Now thread 25 beads on the three threads and attach them to the smallest rim with triple knots. 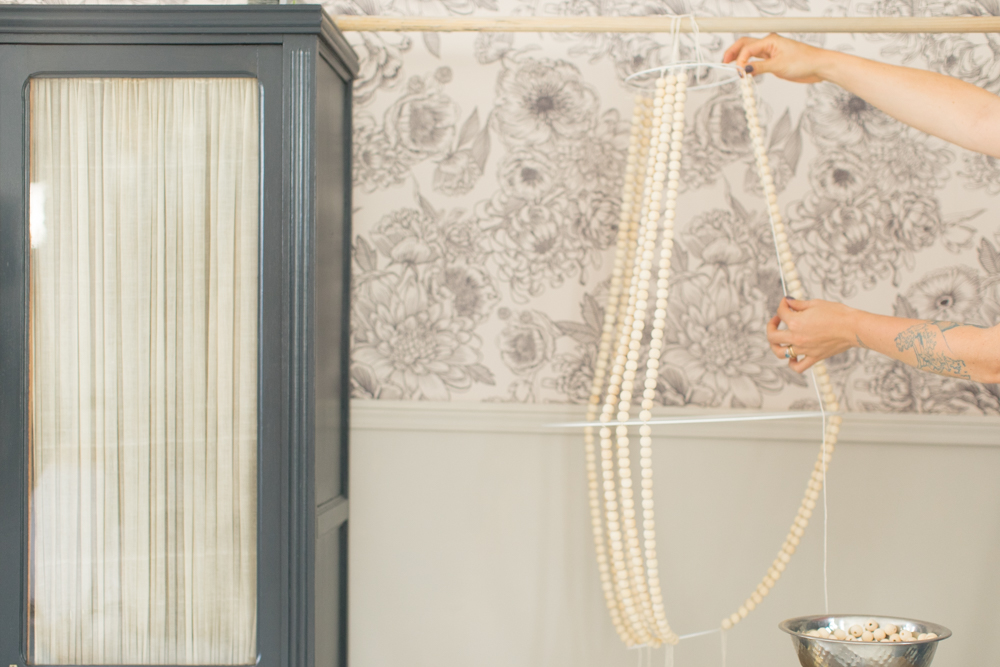 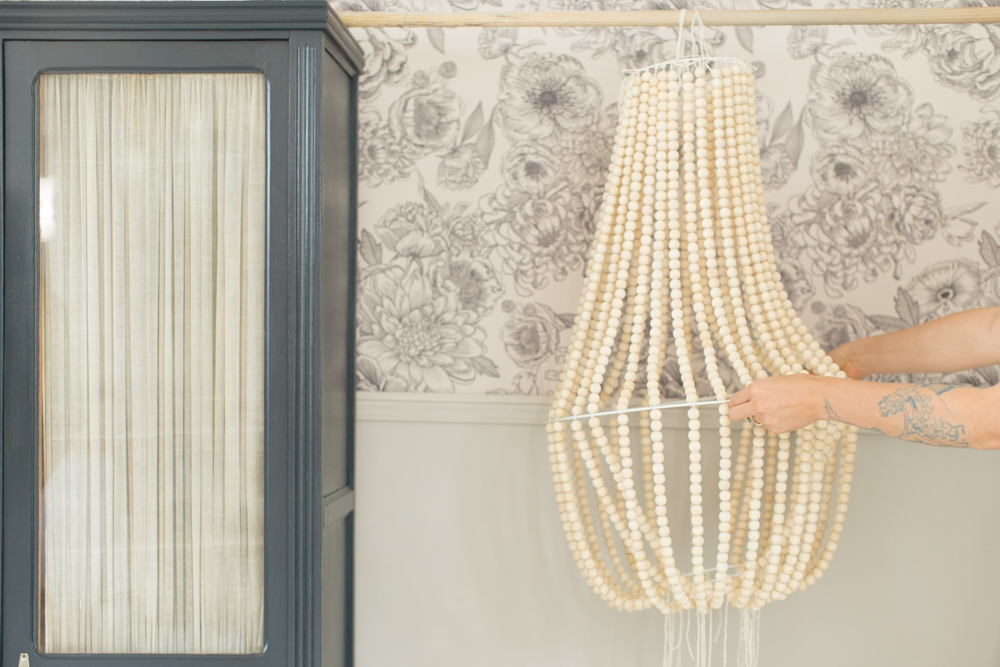 Continue doing this. You’ll need thirty rows of beaded threads for this chandelier. Be careful, when you attach the next row, I suggest putting them around the chandelier, next to your first three rows. When you’ve attached 7 rows next to the first 3 rows that were used to start, thread 20 beads and attach to the smallest rim. This will add an elegant, drapery effect! 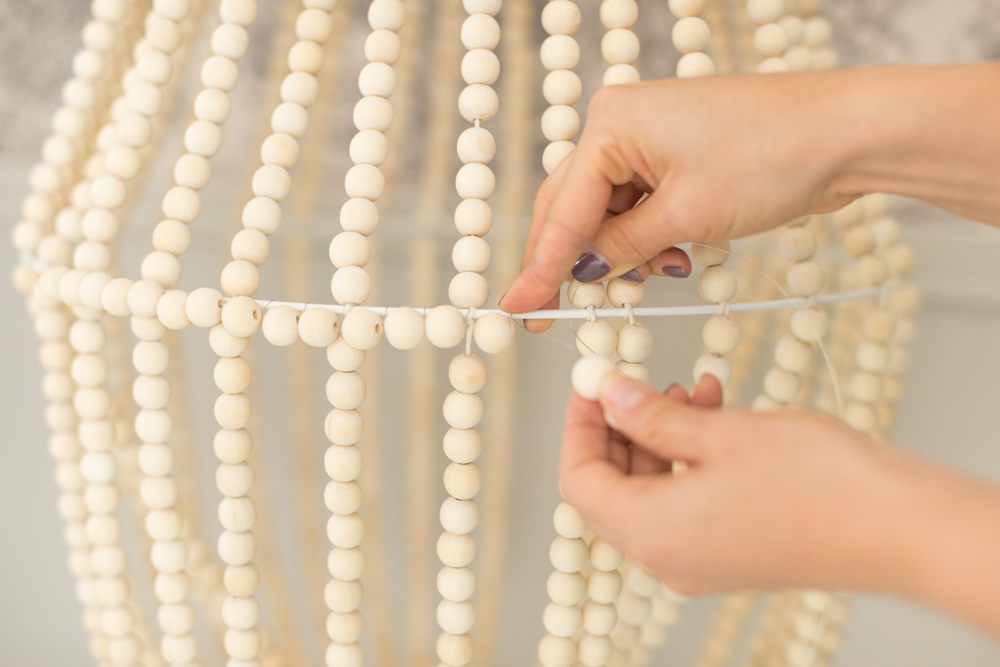 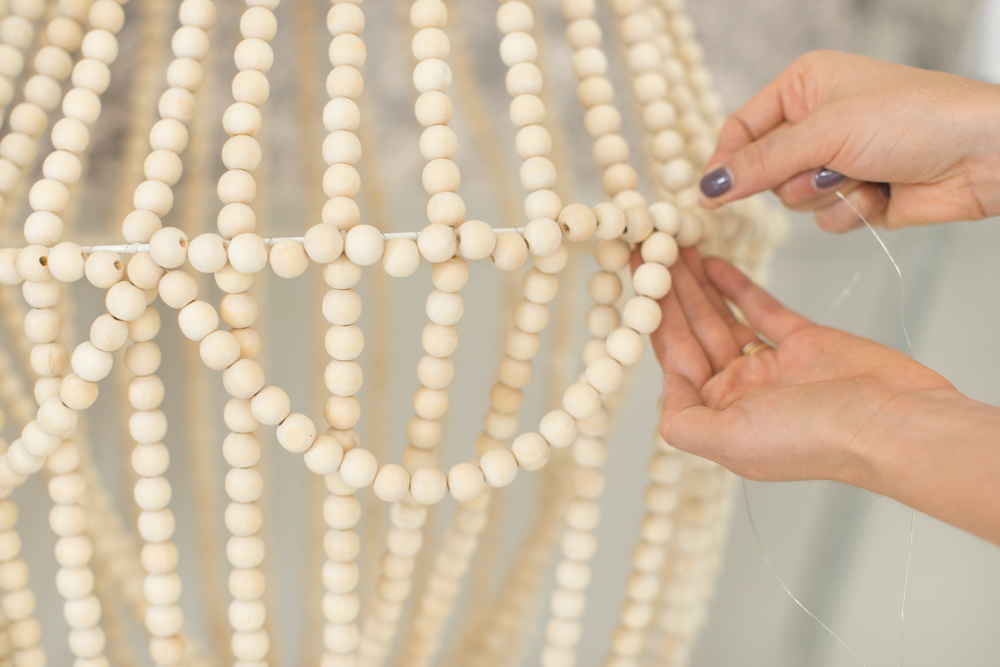 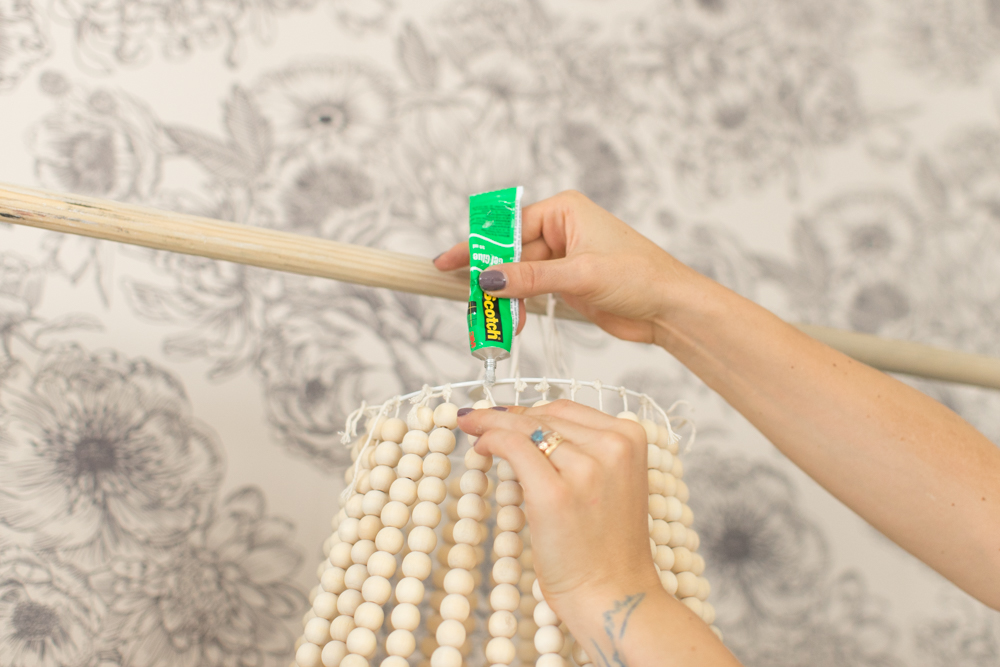 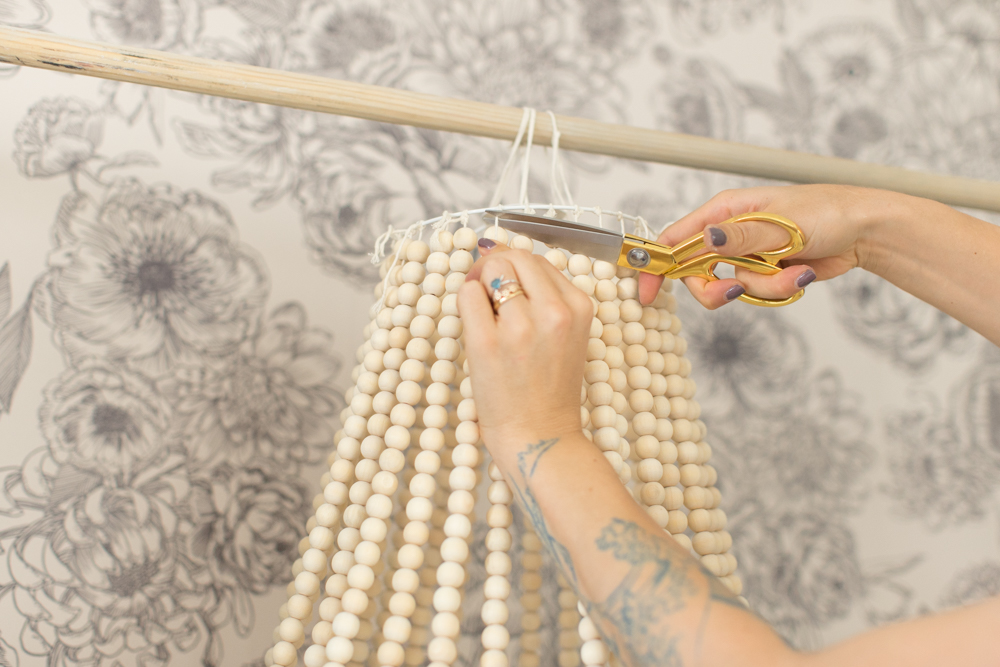 Glue all the knots on the ends of the rows of beads, let dry several minutes. Then cut and TADA!