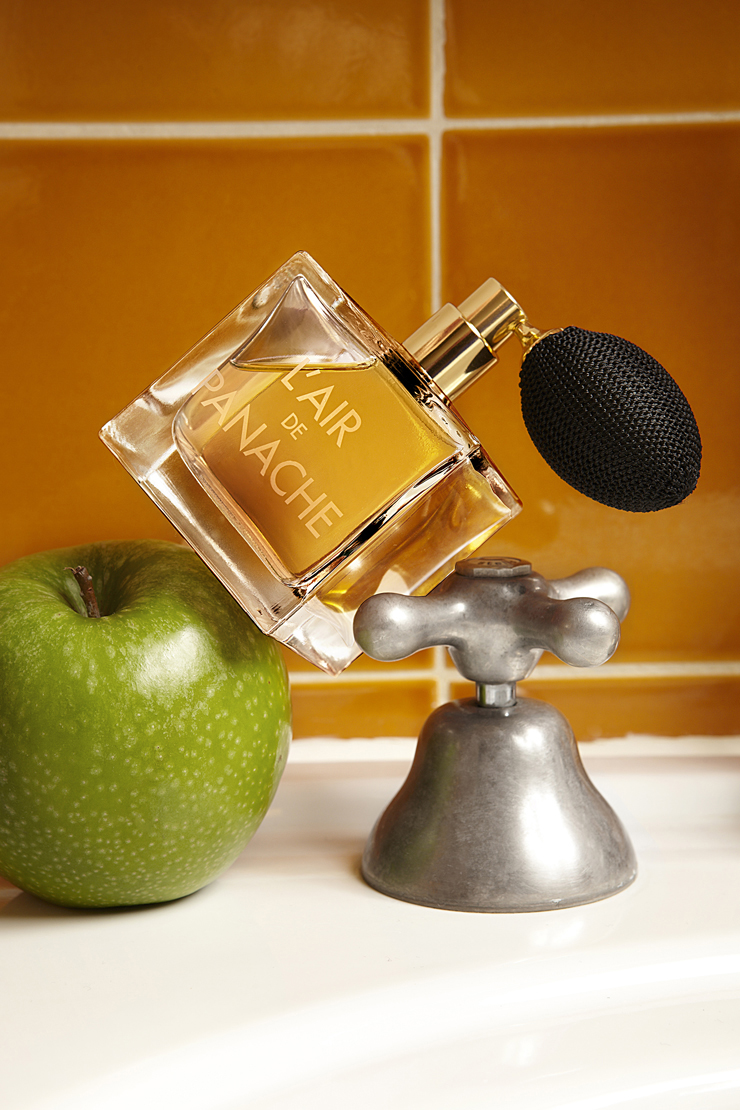 Today I’d like to talk to you about a location, a perfume, a beautiful story… A few weeks ago I was contacted by Nicolas Cloutier, founder of Nose, who offered me something really crazy! I was telling you in my previous article about the very smart promotion of the Wes Anderson movie, the Grand Budapest Hotel… and how the movie kept living outside the theater, well I’m about to tell you about a great example!

In the movie, Gustave H., concierge of the Grand Budapest Hotel, very well-groomed and absolutely insane, wears the « Air de panache » perfume, he has a collection of bottles and when its Lobby boy gets him to escape from jail the first thing he asks him during their run is whether he brought his perfume…

So the Fox decided to have this perfume made… A perfume you cannot buy but a perfume you can smell, in the lobby of the greatest hotels and at Nose, 20 rue Bachaumont 75002 Paris, the fabulous parisian boutique who created this juice.

Nose is a parisian concept store and a e-shop exclusively dedicated to perfume, where cohabit more than 50 brands of perfume from the most specialized creators, very beautiful cosmetic brands and a selection of home perfumes. All these beautiful things revolve around the Nose corner stone: their concept of each and every one establishing one’s own perfume diagnosis.

So what is a perfume diagnosis? Nothing serious doctor, just an awesome and definitely revolutionary concept. When you arrive rue Bachaumont, you’re given an Ipad on which there is the sesame questionnaire. Through a list of questions, like a much more scientific Cosmo quiz, the Nose diagnosis establishes your profile and offers you new juices to test to find what’s suits you. It is an amazing concept for indecisive people and every single person on the cosmetic planet is trying to crack their secret… This app is in constant development, Nicolas savors his success: after the diagnosis, seven customers out of ten buy one of the recommended choice…

Today I had the good luck to meet two enthusiasts: Nicolas Cloutiers, one of the founder of Nose, and Mark Buxton, the nose of Nose (oh yeah!). They tell us the fabulous Nose adventure with Fox, Wes Anderson and Gustave H. 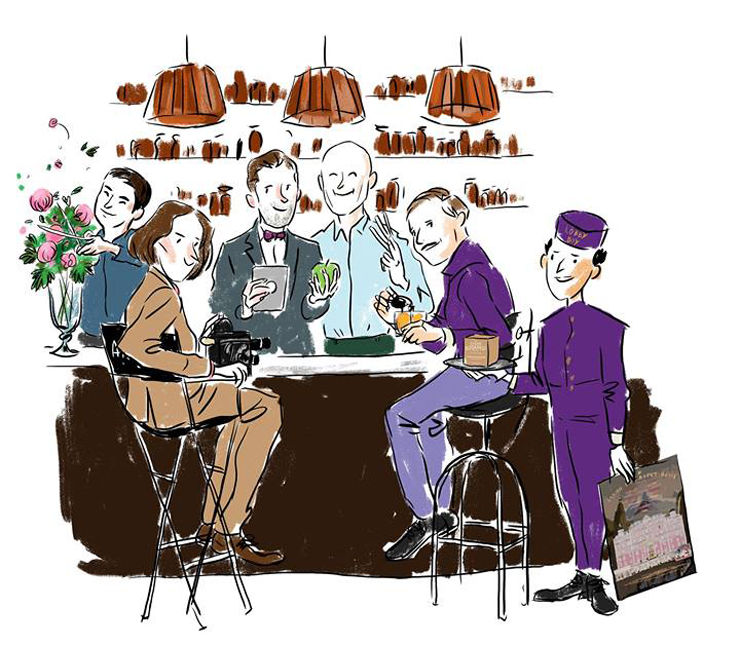 I’m from Quebec and I’ve lived in Paris for 10 years. I’m an olfactory enthusiast, I was unsatisfied with the perfumes offered by large retailers that lack originality. Over the years I discovered exceptional perfumes but I had troubles understanding them, too many offers and not always very quality… I knew a few people in the industry and the Nose team was born. It is a human-sized project with one recipe: our passion and our complementary knowledge. No financing from big companies and no big money objective. We freed ourselves from this industry’s constraints to grow at our own pace with the objective of making Nose an institution.

I joined a German company (H&R) 27 years ago, I trained at their internal school for 3 years, studying raw materials,first compositions, bases etc...Then was sent to Paris after 3 years, as a junior perfumer, where I started working on the 1st briefs.

Even though we had several collaboration requests, we declined all of them. We were indeed too young and didn’t have enough perspective to make collaborations. Besides, collaboration doesn’t mean anything anymore today, every one makes co-signed candles for any occasion. When Fox approached us we had just blown our 18th candle (months) ! We were glad but also embarrassed… We are a really small team (3 people full time) to handle the website, the store and the international development. Suffice it to say that such a project can quickly become a bad adventure if there is no team… With 6 weeks to deliver the perfume (maturation of the juice included) it was clearly impossible. A bit like the history of Nose. Everybody told us not to do it. Since we like challenges, we agreed. Voilà !

We got an email from 20th Century Fox the day after new year ! They asked us to make a real perfume from the fictional one. A quick briefing (informations under embargo) but without any constraint on our creativity. Several grandes maisons had been asked, every projects had been refused. Pressure ! Mark was in a trip to Istanbul. I called him and told him: « Mark, we have less than a week to make our proposal ! ». We nailed it on our first attempt without having anything to modify, him at the juice, me at the artistic direction. Our proposal was accepted by 20th Century Fox France, followed by 20th Century Fox USA, then by Wes Anderson. We then had 6 weeks to produce the perfume !! 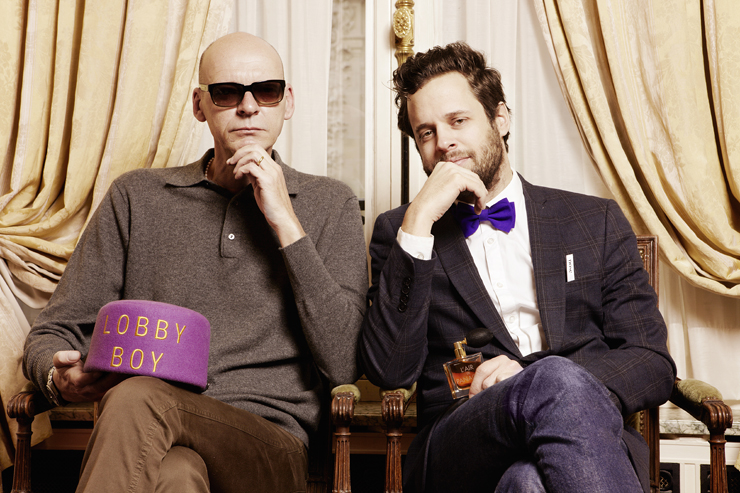 Nicolas: We watched short parts of the movie. Enough to understand the universe of Mr Gustave H. Just like Nose, Wes Anderson was a meticulous person, no details escape him. SO we explored and dissected every element. A transformation as the minutes went at the pace of the plot of the movie. The result: a « classical » cologne which transform itself (olfactory pyramide) and becomes vert animal and woody. Just like the character !

Mark: By watching the trailer and brainstorming with Nico, we came up with a cologne, classic but modern at the same time,rich lots of natural products,sensual and animal at the same time. All you need is a pen, a white peace of paper and a good imagination, that’s how it all started!

The perfumed coats from the visit to my grandmother’s bed where they were put at Christmas and in which I went to sleep, exhausted from the fatigue and emotions. The perfumes of all the people I loved gathered at the same time… My first perfume ? Drakkar Noir from Guy Laroche. My dater’s perfume. I had and still have a lot of admiration for him. I wanted to be like him. His values and his smells. And the one I hate the most… The mandatory DutyFree passings before flying. I hold my breath every time !

I broke my mothers bottle of Chanel No.5 in the bathroom, at the age of 5 years, I never forgot the smell! My grandmothers kitchen in Germany, a mixture of black bread, fresh grinded coffee and the smoke from the old oven,(still stocked with wood). The smell of my British grandmothers kitchen, cheap floor cleaner, actually whole England smells like this... :) One of my all time favourite smells is Vetiver. And outside of the perfumery world, it is roasted chicken and fresh backed bread!! Everything inspires me, for my job, everything is just a matter of vision.  Besides a lot of my own creations, my all time favorites are Feminite du Bois and Nahema.

- Golf de Naple, the best Pizza au feu du bois in Paris,
- Patrick Pignol, port Auteuil, the best resto in Paris, for nouvelle cuisine and my favorite Brasserie is Ille St. Lois
-  I like all the bars in the big hotels,Raphael, Royal Monceau etc.

Other bars and night clubs , I don’t know I’m too old But the all time best kitchen in Paris, is 12 Rue du Bouquet and Roiville!! That’s where I cook....

This is still secret, but I totally agree with Nico, for un little weekend in the country side, “Roiville”! 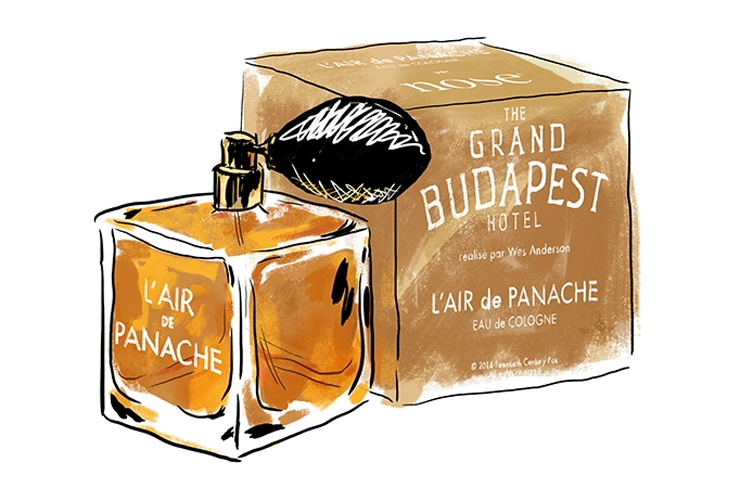 And cherry on the icing for the non-parisian of you who couldn’t come to smell the precious in Paris, Nicolas and Mark offer to make you win 2 perfumes ! To win one nothing more simple: register on the Nose website ici and leave me a comment with your first olfactory memory. I’ll draw the winner on monday evening!