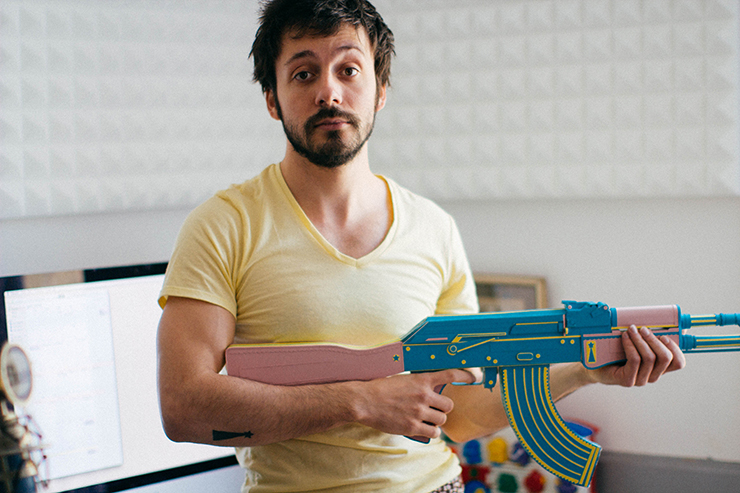 Lorenzo P. with his paper weapon and his lemon outfit...

We are finishing off this week with a new edition of good people... This feature, if you are not familiar with the website, was made to introduce people to you who are dear to me, who inspire me, who have an exceptional story…And today I would like to talk to you about Lorenzo Papace (pronounced “papAchay » and not “Papassssse”). So, who is this Lorenzo P, you ask? Well, he’s an extraterrestrial, a completely crazy being, awesomely crazy. Director and composer, I first discovered the work of Lorenzo 5 years ago, at a time when he was amusing himself doing parodies of the French blogosphere with his acolyte Vincent Pianina on their website "Le petit écho malade". (The sick, little echo).
In each of their posts, the boys showed proof of their limitless ingenuity for spoofing French “influencers” with finesse and irony. I invite you to take the time to get lost in their
archives…Since then, the boys continue their collaborations making totally bonkers videos, “Super Nickel” and “The complete guide to zero knowledge,” but most of all, they partner up to make videos for the Orsay Museum but also on other projects for Arte filled with off-the-wall poetry. They create everything, from music to design, including playing roles as actors! If you ask me, this duo of artists is pure magic, the union of two fantastic worlds making for endless creative possibilities! 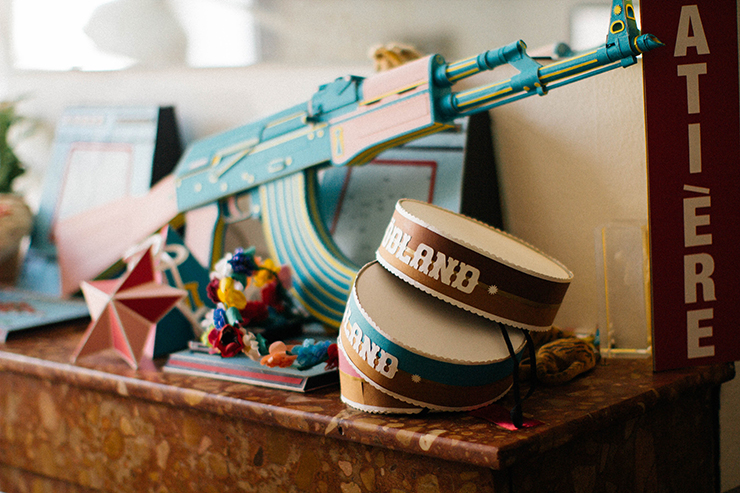 So, a few weeks ago, I managed to break free from my daily routine to meet with Lorenzo in Lyon where he lives. He greeted me dressed in all yellow, with an orange, plastic skateboard under his arm and rings on every finger... He said he wanted to dress like a lemon for the occasion, I mean how could you not love this guy on the spot? Lorenzo opened his home to me, and I discovered in front of my very eyes that this man is just totally passionate and above all, talented. Lorenzo is kind of like a Vishnu of the arts, he is a composer for his band Ödland, but I think I can safely say that his band is a great excuse to create a universe, his very own playground. Lorenzo is also a lover of paper, he is able to create set designs of absolute finesse in order to tell fantastic stories which he thinks up himself, and then sets to music! Quite a little genius, I tell you. 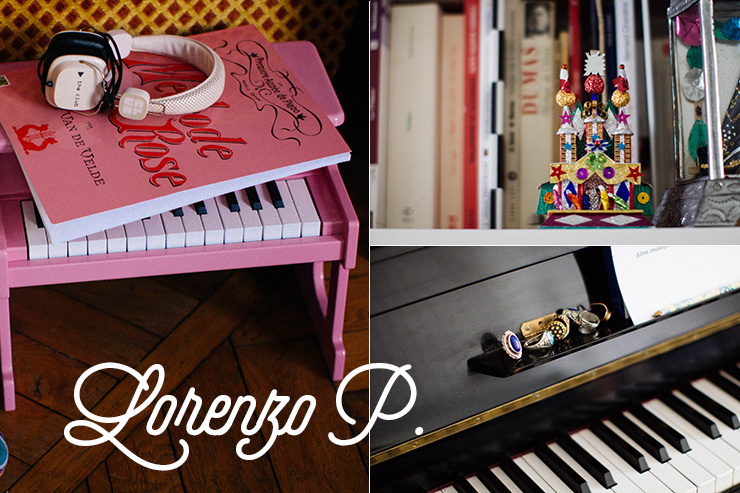 I love his perfectionism and his way of imagining that nothing is impossible. He is capable of leaving for months on end to travel by train around Europe, taking thousands of photos, kind of like one big scouting mission. And then he leaves a few years later, with all the members of his band to shoots all the music videos for their album, one video per country, this album is called Sankta Lucia, with a total of 15 countries visited, and that many crazy videos to go along with it... I give you this depiction of him and hope you like it, in any case Lorenzo, thank you for making me feel welcome and showing me all your toys!

I grew up in a town outside of Lyon. I started studying piano at the age of 4. At first, I didn’t like it, I would cry. At 12 years old, I realized that I could express my emotions through music and I thought that was cool. After earning my high school diploma in Science, I turned towards Applied Art and Design, first with a refresher course, then with a BTS in Spacial Design and finally with a DSAA in Interior Architecture, all in Lyon. As soon as I finished school in 2008, I started working freelance so I could do all kinds of jobs, big and small. I tried living in Paris for a bit, but ultimately returned to my hometown. Upon returning, I quickly wanted to form a music band, and that has since become my number 1 passion.

Going to Bulgaria with Ödland to film a retro-futuristic video at the ruins of the former HQ of the Communist Party (video here). It was so crazy! The small roads of Bulgaria are as beautiful as they are dangerous. But it’s true that the 5-week trip around Europe camping outside, covering 5000 kilometers, by way of the backdrop of Venice, the hill of crosses in Lithuania, the cemeteries in Poland, the castle in Sissi, the villages of the Czech Republic, the antique market in Budapest, the ruins in Sarajevo, the mountains of Greece, while bathing in public pools and at sketchy highway rest-stops, in order to film 15 videos for the Sankta Lucia album, that too was my most unforgettable mega-adventure!

Your best plan would be Interrail. Forget about comfort, we need much less of it than you would think, and have fun! If you are up for it and you don’t have much money, here’s my advice: 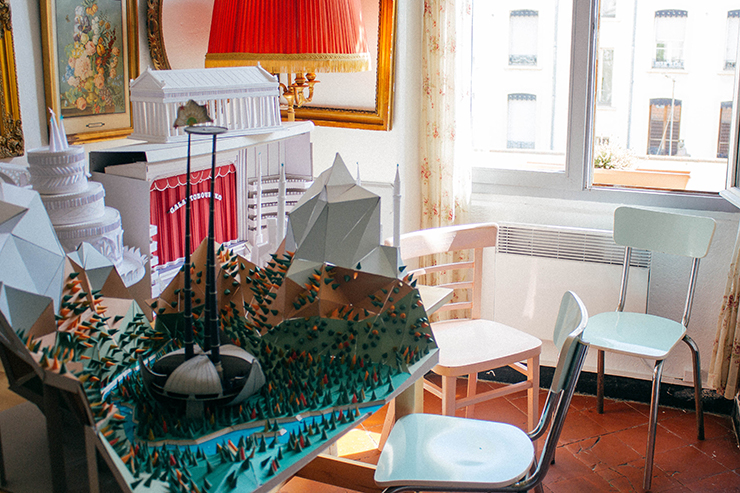 Then only instrument for which I received formal, classical training is piano. It opened me up to music, to its secrets and history. With all the other instruments I pick up, I feel like I’m just fiddling about, I get a kick out of it and it takes me away. I also take great pleasure in working with other musicians, composing for and with them, rather than doing everything by myself. Meeting people through music is a blissful experience.

Yikes, that IS a trap! I’m hesitating between a ticket for a pilgrimage to Lourdes and a portrait of Lukashenko, the President of Belarus. And at the same time I think that both gifts would make me laugh my butt off. Oh no, great, now I’m afraid my friends will really think about doing it!

It’s the question to which I will not have an answer. I’m thinking, but I can’t come up with anything. In fact, that’s probably why we Homo sapiens need each other. Asking questions and giving answers all alone is no fun, there’s no element of surprise. The last woman on Earth will have lost her taste for interviews. 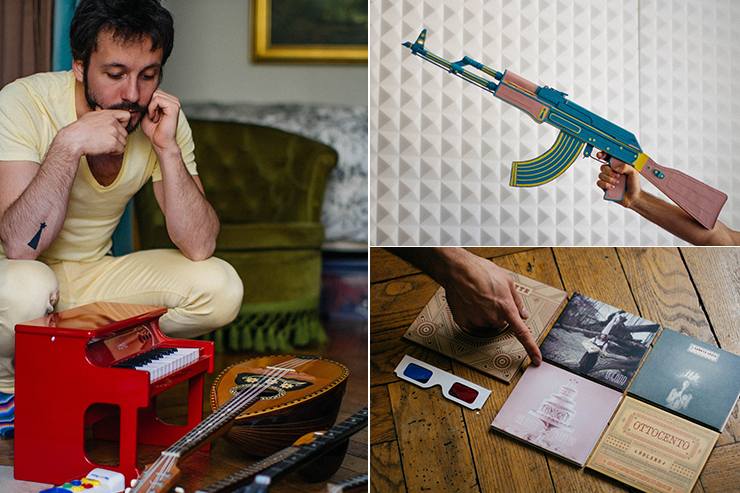 Impossible question, but I’ll go along: Either in Stockholm, Warsaw or Naples, with my band, trying to do what makes me happy, in a Europe since destroyed by Right-wing extremists.

My Praktica reflex camera! It’s really my favorite travel item. I love silver-film photography and am just bummed out that it’s becoming more and more expensive of a process.

I think it’s Via con me by Paolo Conte, which my mother listened to a lot. It might just be my imagination, but I get the feeling I had heard it even before I was born. In fact I think my very first memory EVER is a musical one. Our first perception of the world is through the sounds we hear, and that’s surely what binds music to our subconscious. I also remember my grandma pretending to be an orchestra conductor, with classical music blasting, it was great! 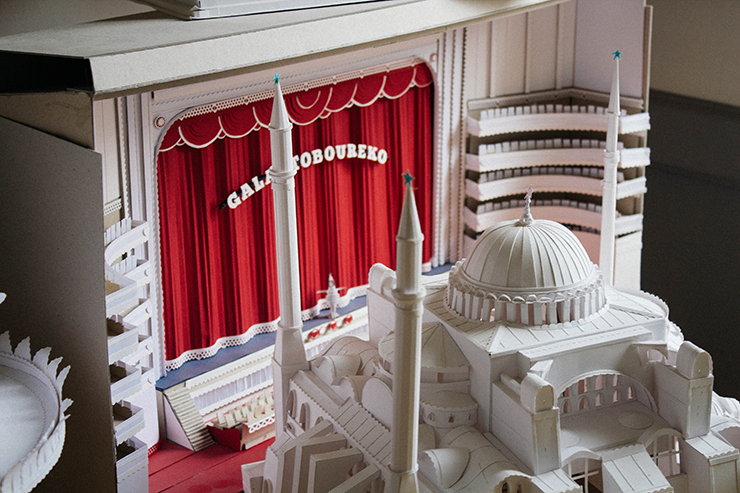 Yes, I’m in the process of making an album with Ödland called Comète. For the first time ever, we are introducing electronic sounds into our acoustic environment, and it’s like a renaissance for us. So, I’m super excited about that! If all goes well, we’ll be filming the video in Sweden. And for the whole month of May, Vincent and I will be filming the opening credits to the documentary Les aventuriers de l’Art moderne (The Adventurers of Modern Art) in stop-motion. It will be broadcast on Arte in November, that’ll be a first for me. It puts a bit of pressure on me, but it’s a good stress. I spend my time creating and filming a mini, paper-version of Paris.

To never worry about it haha! No, seriously, you should probably put your passions at the center of everything, exercise your curiosity as if it were a muscle, and above all, never let yourself be alienated because of work or what others think of you. It’s easier said than done, it’s a form of resistance… 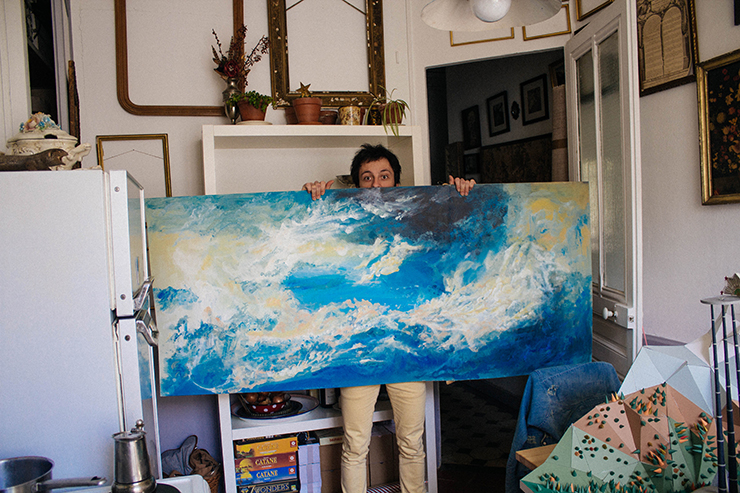 Lorenzo, thank you for these lovely moments! And you will see him again very soon on Make My Lemonade as a guest for a special Paper DIY!