KIMCHI BALL FROM MY HEART[:] 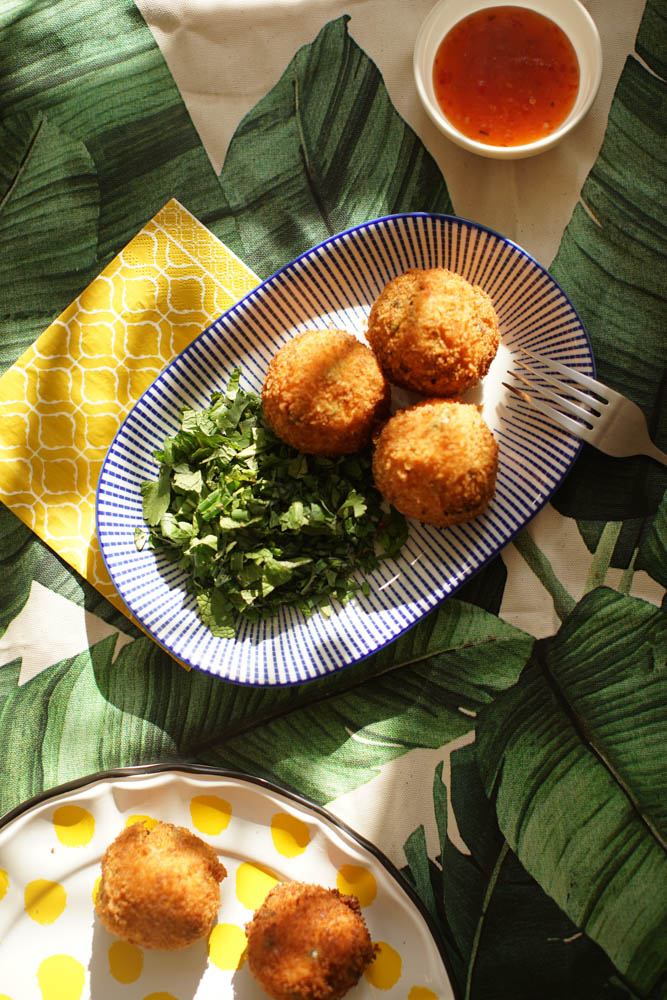 Happy Monday, everyone! I hope that you’ve had a nice sunny weekend wherever you are, since at Paris it’s winter again... that’s a lie, we had two rays of sunshine, just enough time to take a couple pictures for this insanely crazy week! After the Sushi invasion of the 2000s, Thaï cuisine, and bentos by the thousands, now it’s time for Korean Street Food! I’m all for it, I’m literally stuffing my face with this trend, I love the restaurant ‘Hero’ where thepork rib buns are mouth watering, and I recently discovered SAam not far from my place. A couple of years ago in New York I had Kimchi balls without knowing their name and was weirded out by the texture, the spicy taste, and also the melting cheese in the middle, and the layer of surprise breading­ basically everything I like. So the other day at SAam I saw these little rice balls in a neighbor’s plate and my memories came flooding back, I had to have it! It was like deja vu, I spent two hours eating my Kimchi balls trying to analyse their texture and ingredients with one thing in mind: to eat Kimchi balls for the rest of my life. So I experimented with different recipes, and for the moment, this is the one that’s been the most consistent! You can also mix shredded meat in your rice or even little pieces of ham, anyways, have fun and enjoy! 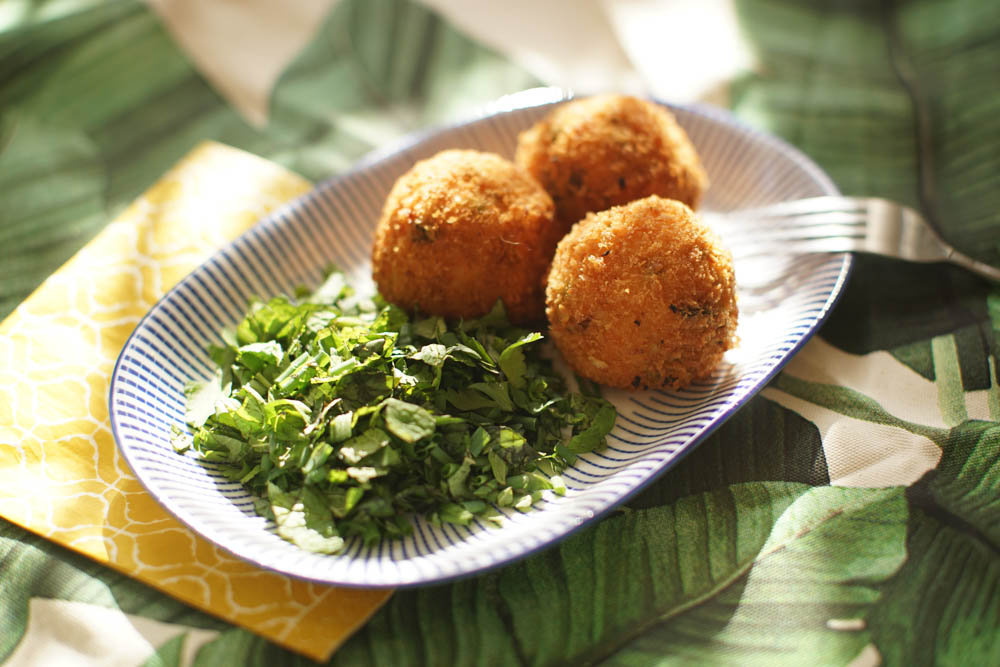 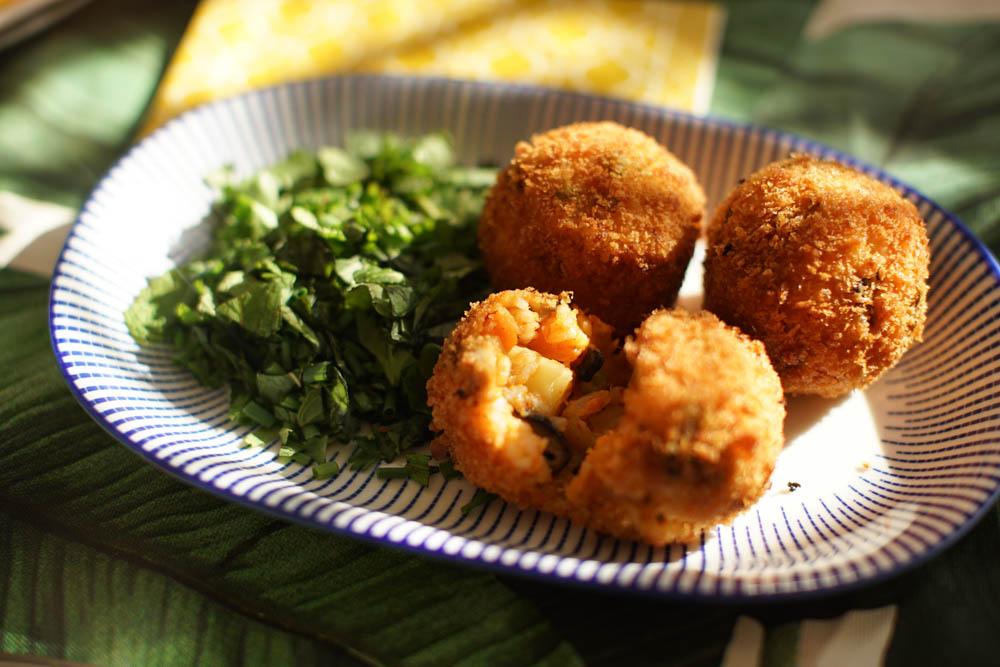 You’ll see, it isn’t hard even if the shopping list looks long, I promise that everything’ll be fine. Do it methodically and above all be patient between steps otherwise it’ll be a little messy.
Start by cooking your round rice. For those who don’t know, to make rice right, you need to wash it first. So before boiling the water, rinse your round rice making the water washing the rice the lightest color possible. Put the rice in a pot and add water, it needs to cover the rice by a little more than a centimeter, no more. Cover the pot and let cook for 10­15 minutes, checking up on it from time to time to make sure the rice on the bottom isn’t burning. Once the water has completely evaporated, let the rice completely cool, it’s important for the next steps. While it’s cooking, finely chop up all the vegetables: onions, mushrooms, carrots, and celery and thaw the peas. Take your two jars of Kimchi, purée one of them, use up the other one, in little pieces, I know it’s a little bit gross but it’s important for the next steps too. Once the rice is cold, in a large pan or wok heat two tablespoons of olive, grapeseed, or coconut oil, or butter. Add all the vegetables and the thinly sliced Kimchi; cook on medium heat for 3 to 4 minutes; mix well to add color to it all, then add the rice and the puréed Kimchi and stir vigorously so that the rice is completely colored and the vegetables are evenly mixed. Cook for 5 more minutes on low heat. Then take off heat and wait a half hour for the mix to cool. This is my favorite part, before getting started, get your 3 bowls of flour, egg yolk, and Panko ready in front of you, as well as the cheese that’s been cut into little 1 cm cubes. Wash your hands well and keep them moist, to avoid stickiness. Take out a little bit of the rice/Kimchi/vegetable mix, make a little ball in the palm of your hands, about 7 to 8 cm big. Make a little hole, slide the cheese in it and close it up with some rice, then rework the ball a little so that it’s nice and round. Dip in the flour, then the egg yolk and generously in the Panko, even a bit more Panko so that in the end your Kimchi Balls will be extra crispy! Now in a pot (not too big), heat the oil and once it’s really hot, put the Kimchi balls in two by two and heat for about 3 minutes but be sure to keep an eye on their color, so they don’t become too brown! Take them out withthe help of a skimmer, drain them with a paper towel and serve hot, but most importantly, enjoy! I had them with a small salad that I’ve told you about here and sweet Thai chili sauce. 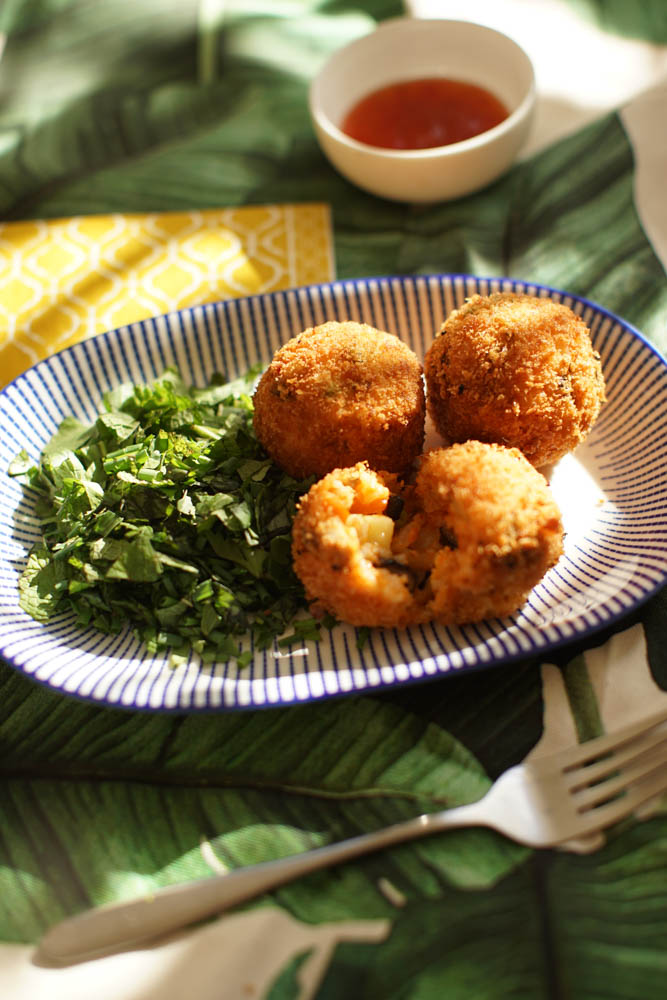