Dear little otters,
(this name might change since Lisa, unlike me, doesn’t think that otters are one of the best animal in the world)… I hope you’re doing great, I’m here to tell you about the backstage of the Anais Anais shoot, because yes as you might imagine behind those beautiful pictures there is a lot of organization and adventure ! So without further ado here is the first phase of a shooting’s organization ! 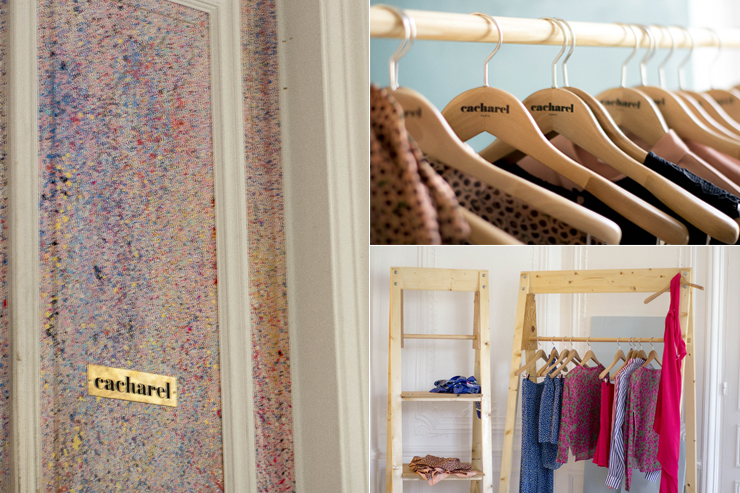 In the first phase, after le brief, the inspiration pictures and the choice of the shoot’s universe and the photographer, it’s time to deal with stylization. So we go to press offices to get different clothes and to choose the looks we will then shoot. For this series we went to the Cacharel showroom to select items for the stylization. As you might see, yes, it is an amazing place with a design both pure and sweet as a caress: look at this door ! Even before getting inside the showroom we were dived into a light and colorful world, well simply the Cacharel universe… (and why not a deco/paining stain DIY…?). 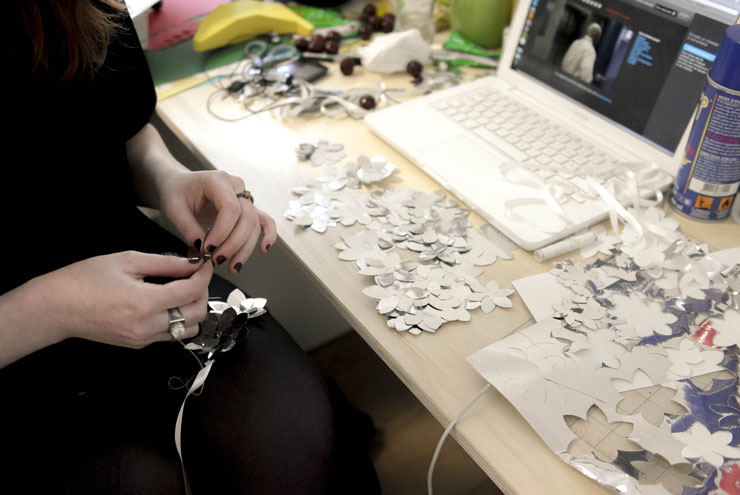 To complete the stylization we made little sliver flowers crowns in order to bring to some modernity and a homemade touch to the shoot. Hundreds of little flowers cut with our magical machine: I’m talking about the famous Silhouette (baptized Raoul a few weeks ago). No I’m not watching Breaking Bad while working, and don’t worry I cleaned my office (a little) since that picture… 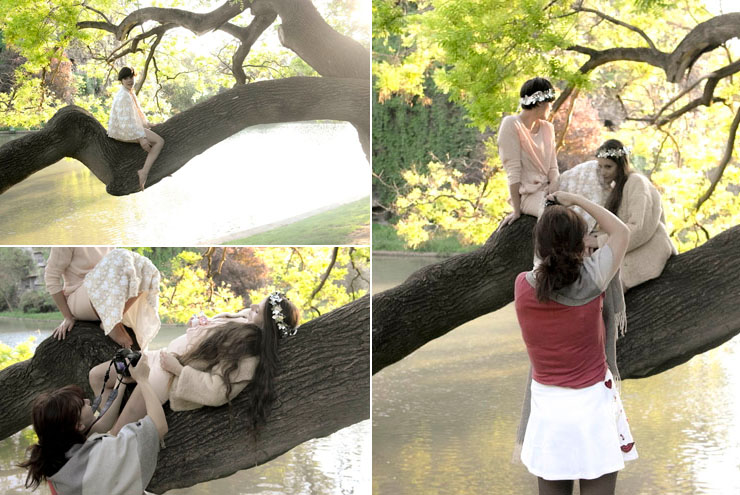 And a few days later when the weather stopped being unpredictable we were finally able to shoot with the incredible Charlotte Abramow. There always is some unexpected and we had to change a few looks because of Justine B.’s absence. Imagine Lisa and Alexandra with very few clothes on walking like nymphs in the middle of tourists and kids, a moment of pure magic between trunk’s climbing and hill’s descents. It’s always hard to shoot outside but Charlotte is a pro to find the right place and the perfect light (because yes, light is one of the most important factor inside and outside) ! 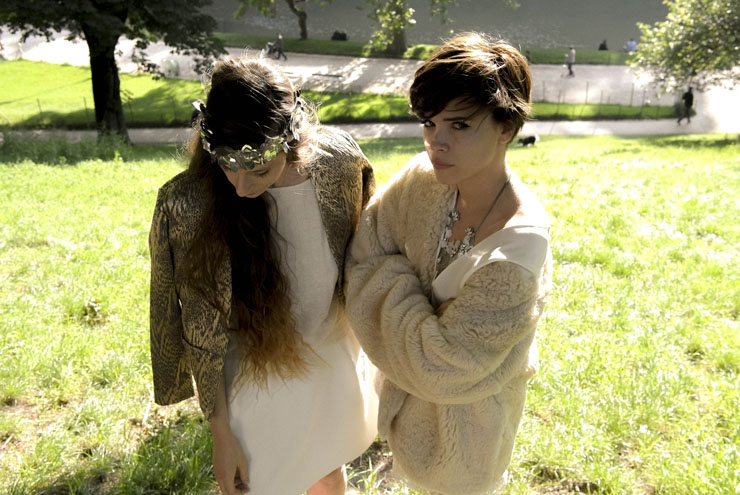 The difficulty of outside pictures also is to be able to avoid external elements disturbing the image (like passer-by, street lamp or any other typical street furniture you find in parisian parks). Willing to have a savage decor we had to deal with the numerous people who also wanted to enjoy the friday night’s sun. On this picture you can also enjoy this most friendly look Lisa’s giving me. And yet I hadn’t say anything, I didn’t mock or insulted Frida or anything else, the reason of this look remains a mystery… 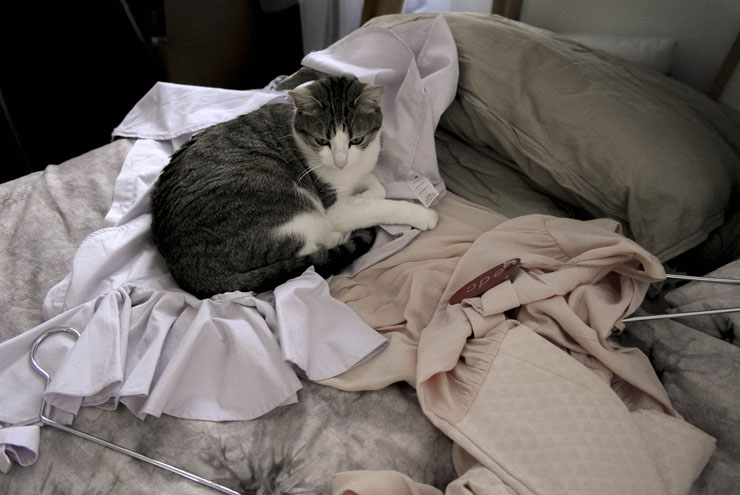 Well talking about Frida, it’s true that we see her less now we have our office but at the first opportunity she likes to bring her personal touch and to participate to the stylization by laying down on the clothes (yes I can imagine your disappointment discovering that Frida isn’t only grace and voluptuousness). Yes because the preparation of a shooting is also that: lots of ironing beforehand to avoid losing time on the D day. 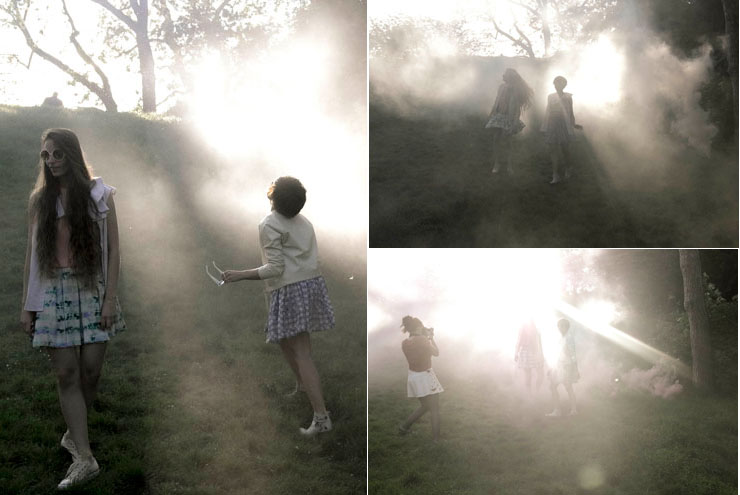 Shooting, phase 2 : smoke ! Unless what we might think looking at the final pictures, it is very hard to control smoke, it’s simple it never obeys. We therefore have no advice to give you if you want to use some unless do it in a ventilated place (it gave us a few coughing fits…). 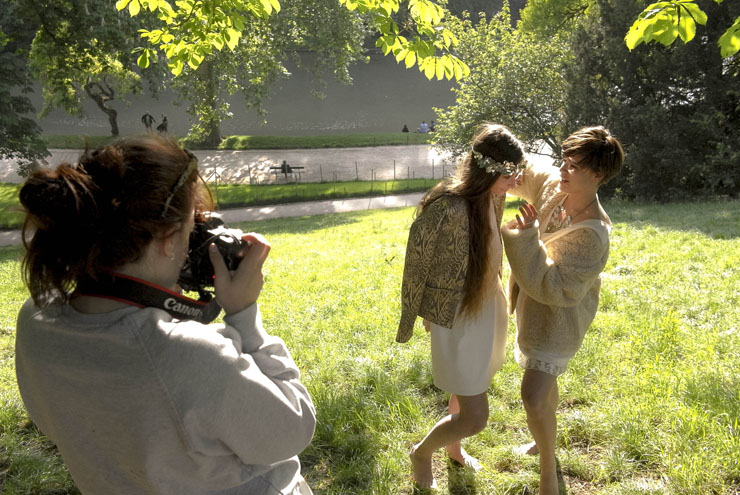 To come back to the flowers crowns, we already thought you’d want to make them but unfortunately this metallized paper is only available to professionals and here is all your misfortune.  But don’t worry, we thought about you and here is a little contest to win three crowns and Anais Anais and Premier délice fragrances !
To do so, rendez-vous on the Make My Lemonade Instagram account: follow @makemylemonade, re-port cette photo: to re-post a picture you simply have to make a screenshot… and caption it with a little sentence and the hashtag #makemyanaisanais ! I’ll draw three winners on next Tuesday! Sweet kisses and thank you for everything !
29 mai, 2014
Précédent Retour à Blog Wordpress EN Suivant