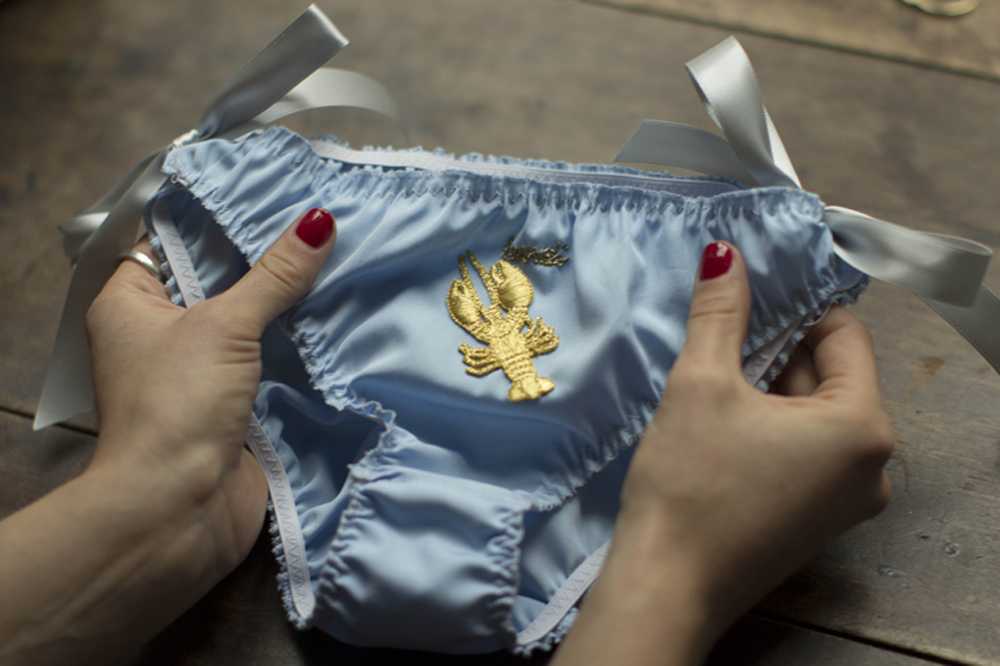 Happy Saturday sweeties !
How excited I am to give you this DIY ! I found the path to my sewing machine again and I didn’t think it could fill me with so much joy. I don’t need much after all! I take this opportunity to ask you if you know a silkscreen printing workshop in Paris where I could have fabric boards silkscreened ? We never know and I really have some trouble finding one in Paris. Back to our topic, during the making of this DIY I was thinking about what we could embroider on the front of the panties, I wanted to embroider strawberries, raspberries, cherries, something red, this baby blue poplin chosen by Charlotte made me think about Snow White…Then while tidying the office (the lemonade studio is so well organized that Bree Van de Kamp would be proud) I found golden mini lobster iron-on adhesives that I bought in New York last September. General hysteria in the office, we’re going to embroider lobsters on the panties, the idea is so absurd and unconventional that it wins everyone’s approval, even the men’s. I will spare you the search of the title of this article, you escaped nice puns… I hope you’ll like this blue and golden seven-days set of panties (too bad for the red berries patch, I’d rather paint my nails with that color).

Cost: about 30 euros for everything
Length: about 1 hour for each panties
Difficulty: average but don’t worry you’ll become the queen of panties !

To make this DIY you’ll need:
and for the box:

After you download and print the templates, cut your parts, pin the crotch part with the front part then with the back part. Sew at 0,5 cm from the edge. Then take you second crotch part and place it on top of the previous seam, pin and assemble them as close to the previous seam as possible, you can even superimpose the seams.

Iron the crotch well to check that all parts are lined up, then on the front part of the panties lightly fold the top for it to be of the same size as the first one.

Mark this fold with your iron at the junction between the crotch and the front of the panties, pin and sew that part while trying to sew it as close to the edge as possible to superimpose the seams and get a clean result.

Put your machine on the zigzag stitch position or on the buttonhole stitch with a 1 stitch width (the smallest) and sew this zigzag stitch on every edges of your panties to have a clean finish, like some sort of neatness embroiderer.

Take small scissors and cut the possible ungraceful threads. You can then download the days file here (in french of in english, your call). Print it and trace the day of your choice.

Then trace it at the center of your panties (here at 2 cm from the top of the panties). Use the embroidery ring to stretch your fabric well and start embroider.

Make small stitches close from each other, we tried the chain stitch but it was too rough for this typography so make dotted lines of a few millimeters with your embroider stitches. Then take you lobster or other patch, iron it on and embroider it so you won’t loose your seafood in the washing machine!

Take your elastic (29 cm for the front waist and 29 cm for the back waist and 45 cm for the crotch parts) and start sewing the elastic with a zigzag stitch (stitch width: 4). You have to pull your elastic for it to join both ends of the panties. You’re going to tell me that the elastic length is shorter than the fabric but that’s normal, you have to pull (gently) on the elastic to make him as long as the part you’re applying it on. You have to dose and pull evenly in order to create uniform pleats, it’s all going to be okay you’ll get through it!

You can already admire the little pleats forming thanks to the elastic and keep it on with the crotches. 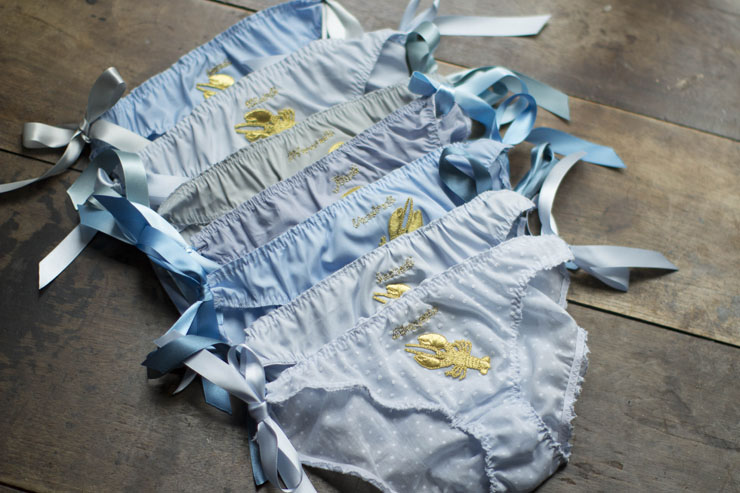 Once your templates printed, take your ruler and blunt scalpel and lightly draw the lines you’ll use to ease the folding. Come one: 1, 2, 3 Fold, follow the dotted lines of your templates !

You now have to fold again each side on itself several times while sliding the small external stripes or the angles below. Repeat the same steps with the second part of the box which is a little larger…

Then fold your nice panties: both sides toward the inside.

And one last fold ! (Yes we thought you might not know how to fold a panties…)

You just have to put it inside the box and TA-DA ! 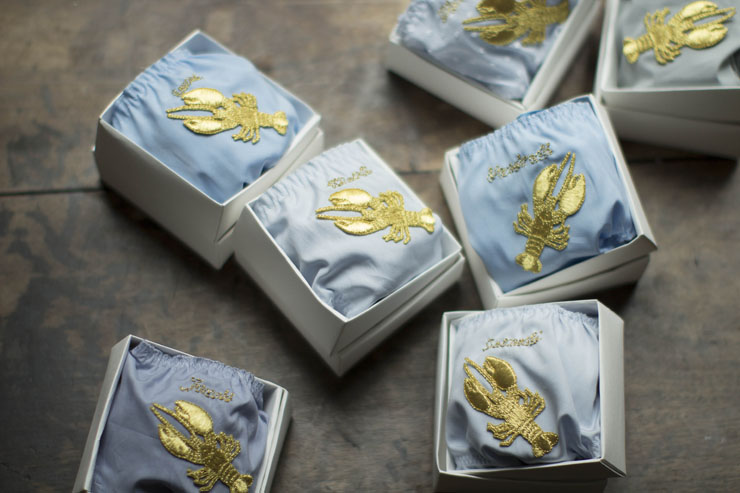 And here is a little gif to finish! And since you are the best reader in the whole world, I’d like to thank you by making you win this seven-days set… To do so leave me a comment telling me why you should have it more than anybody else (and tell me your size from XS to XL, I’ll make another set for the winner) ! I’ll draw the winner on next Saturday, I can’t wait to read from you and in the mean time the saturday lobster and I are wishing you a great weekend !